What will you remember most about 2010?
this was a pretty wacky year for me. i think that bringing the barnjo, which is my electric guitar/banjo hybrid, and getting that up and running, has been the highlight of my year. by virtue of that instrument, i can play all my repertoire at once. so that has me pretty excited. i think pizza box is the best record i ever did, that feels pretty cool to be able to say that {it came out this year}. i've been out here since the late 80's driving in vans and playing clubs. it feels good to be getting better. i just keep practicing and working and developing ideas.

one of the main lessons i learned this year, is i'll get to working on something, and in the midst of working, i sometimes realize the goalposts will get moved on me, but then something else really cool will happen that i didn't plan on, that's actually hepper then what was initially conceived. and learning to just trust that process. it never fails, i just worry that it will. as long as i don't wig out at the wrong moment, something badass will happen.

What album or albums appeared most often in your iTunes?
well i've been going to through a hardcore trip this year. lots of hardcore. i like the early black flag and the bad brains. this ep by a knoxville band called koro is really hep. that's older stuff. clockcleaner, homostupids, there's a bunch of newer hardcore that's awesome. that video on youtube of the dillinger escape plan at the virgin mega-store where the singer runs across the crowd is perhaps the best 8 seconds of music ever made. that music, and like, ornette and stuff, sounds like my life. like when you walk down a city street or you're out dicing with the 18wheelers on the interstate. my life does not sound like bluegrass, or contemporary country. my life sounds more like the yellow swans.

What was your favorite show or tour in 2010?
well i really enjoyed playing with honky at emo's in austin earlier this year, that was badass. bobby rock is really one of the greatest metal guitarists in the world, ever. i really dug this last tour i just did with my friend branden harper, we've been playing drum kit, samplers, and barnjo turned all the way up. and that's been such a far out trip, i intend to stick with that oeuvre through the coming year for a record and tours galore. there's about a one minute video this guy sent me of us playing, and it sounds like metallica ornette blues. so. how can you lose?

What emerging band should readers watch out for in 2011?
i'm really interested in this guy stripmall ballads. i guess he's not really emerging, but if you haven't heard it, it's new.

Who would you want to collaborate with next year?
mitchell froom, eyvind kang, josh homme, i like dj shadow's drum sounds. a split 7" with zeke. i don't know, lots of stuff. i'd like to come out with my own skateboard.

my ontological system, or, what it's like to be here
Blog

a. results are produced indirectly.

b. if you think you know the answer, you've just discarded at least half of the answer.

c. things only exist in their particulars.

d. observing things causes them to become. or rather to cease becoming.

f. there is a universal set of all extant knowledge {ideas}. symbolized by e.

g. the seen proceeds from the unseen. there is another world, or other worlds, behind the world we see.

h. proof is weaker than matter-of-fact.

i. in a way, everyone is right, in relation to the data they are dealing with, or able to deal with.

j. things exist in more than one place.

k. as we proceed further from the initial cause, slight changes in the space/time continuum produce more radical results. chaos and disarray increase. within which is hidden the creative.

l. at the top of the hierarchy is unity.

m. language is an inadequate means of conveying philosophy. conversely, language has the ability to communicate much more than simply information.

n. spirits exist. there are group spirits, individual spirits, spirits of place, and so on.

o. god is. and he speaks and acts.

p. cause and effect are only part of reality.

q. in a complex system, there are many unaccounted for resultants.

r. if a system is hefty enough to explain itself, it will be fraught with contradiction.

s. given data density, humans, fearing they are actually dead, behave in ways to elicit a reaction of some sort, thus proving for a brief moment, to themselves, that life exists.

u. the universe is self-correcting.

x. we don't get to select the outcome for actions we take.

y. win/win is a better relationship than win/lose. win/lose is ultimately lose/lose.

z. there is a fairly high degree of probability that an iteration will invoke it's opposite.

“Caveman” begins with a few banjo strums before bass, drums and slide guitar come crashing in along with five-string master Danny Barnes’ easygoing voice, making this track seem like a happy mixture of equal parts John Hartford and Dave Matthews, a combination of talents that hover over the rest of this 11-track, 41-minute CD.

Danny Barnes is a fascinating individual. The Bad Livers co-founder is a banjo player who grew up playing his instrument to Ornette Coleman and Led Zeppelin records. He’s gone on to develop his “folktronics” approach in the live setting which he describes as “a highly processed banjo sound with a lot of loops and atmospheric samples flying around.” In early 2009, while recording on the Dave Matthews Band’s Big Whiskey and the GrooGrux King an invitation from that band’s namesake led to a deal with ATO Records. John Alagia (DMB, John Mayer, Ben Fold Five) produced Pizza Box which ATO released earlier this year. The following conversation offers deep insight into Barnes’ creative process as well as the development of Pizza Box, which Barnes marvels at as “the best record I’ve ever made.” Ladies and gentlemen, Danny Barnes… [3-page interview at Jambands.com] 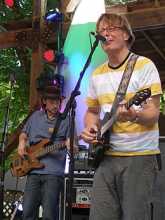 Want to hear what it sounds like? Thanks to Taper Mark, the show is available for free streaming and download at http://www.archive.org/details/dannybarnesandfriends2010-07-18.soundboard.flac16.

Several friends - including Jeff Austin and Darol Anger - joined him for songs from Pizza Box and other records (including an old Bad Livers song and an new song he wrote with Jeff Austin).

Utilizing the universal language of music to express its central themes of peace and global responsibility, the musical collaborations combine Hancock’s genre-defying musical vision with the “local” musical identity of cultures from around the world. “Music truly is the universal language,” says Hancock, “The Imagine Project” will explore that concept across the globe, uniting a myriad of cultures through song and positive creative expression. My hope is that the music will serve as a metaphor for the actions taken by the inhabitants of this wonderful planet as a call for world harmony on all levels.”

A global musing on the power of song to bring people together, the recordings for Herbie Hancock’s “The Imagine Project” have taken place in each collaborator’s home territory whenever possible, and embody the spirit, hearts, sounds, colors and flavor of each locale – a complete sensory musical experience. The result is an album/film without borders, both a celebration and a call to action.

Listen to Barnes with DMB at Bonnaroo
Story

Click here to listen to Danny perform three songs with Dave Matthews Band this past weekend at the Bonnaroo Music and Arts Festival in Manchester, TN.

He was able to take a few minutes to chat with us from his home in the Seattle area about being an Idea Generator, his banjo and—of course—what’s on his pizza.

As previously reported, in addition to two performances on his own banjo player Danny Barnes sat in with Dave Matthews Band at Bonnaroo Sunday night. Barnes crossed paths with the members of Dave Matthews Band once again last night when he opened for the group at Cincinnati, OH’s Riverbend Music Center as part of Robert Earl Keen’s band. Partway through Dave Matthews Band’s set, Barnes emerged for the second time this week to play on Matthews’ “Corn Bread.” The Bad Livers banjo player remained onstage as Dave Matthews Band covered his original song “Road.” The track appears on Barnes’ ATO release Pizza Box.

The personnel count increased from seven to eight when banjo player Danny Barnes joined the group for two songs. Barnes, who appeared earlier in the evening as a part of show opener Robert Earl Keen’s band, released the CD “Pizza Box” last year on the Matthews-owned record label ATO.

Barnes sat in on “Cornbread” and was given a solo, though his spotlight was taken by Matthews, who hammed it up with an odd routine of posing and dancing to Barnes’ banjo picking.

Matthews yielded on the next song, when Barnes sang lead on his own tune “Road,” a rock number with a double-time bluegrass pace that the band approached with a bit of unsteadiness.